Working together to cool the hottest parts of our cities 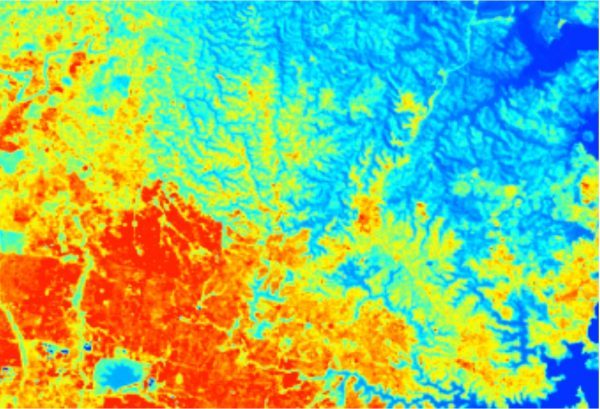 How do we reduce the effects of our Urban Heat Islands? 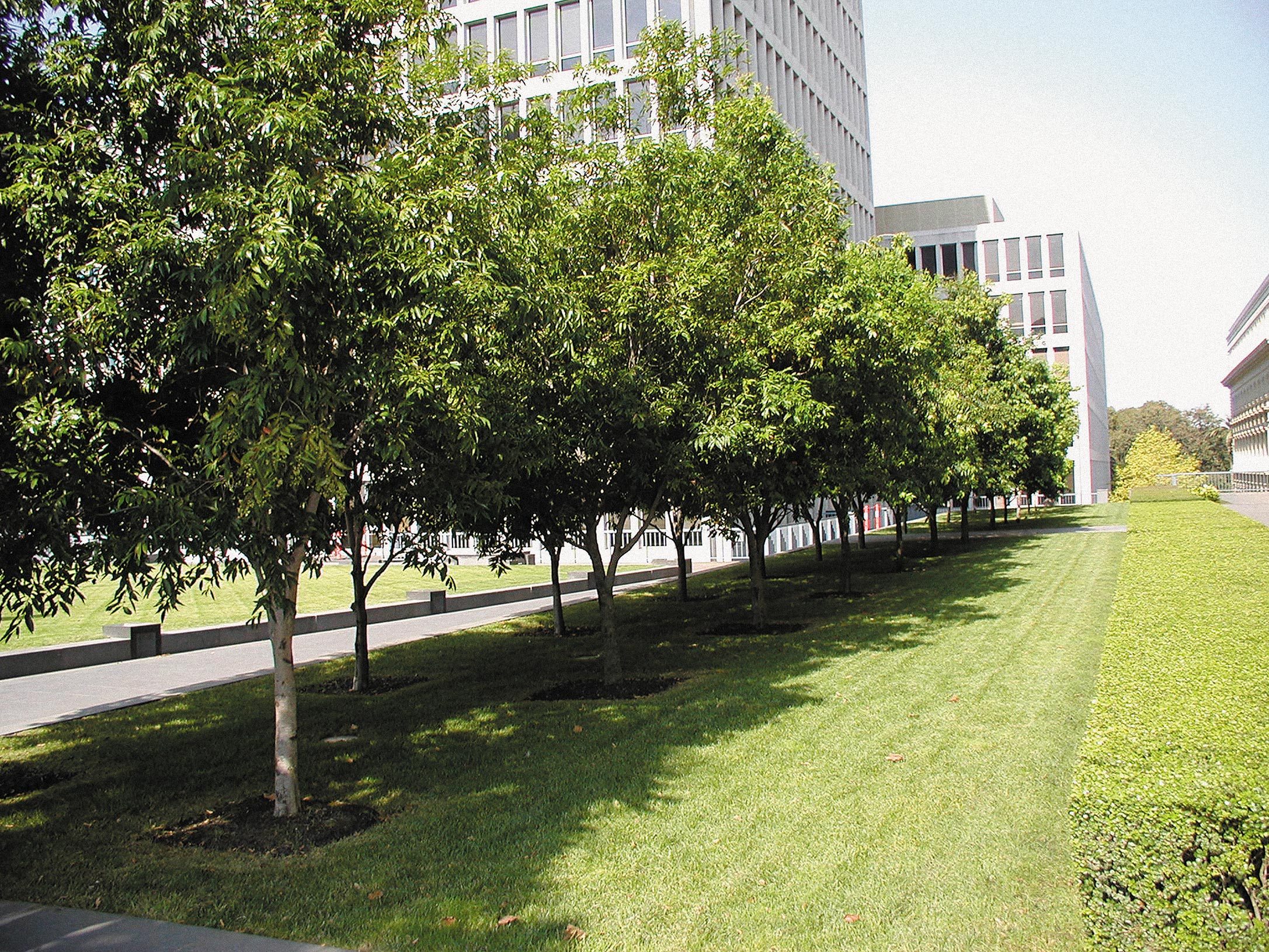 As our summers get hotter and hotter, it’s more important than ever to consider how we manage heat accumulation. Over the next decades, our lives may depend on mitigating the effects of heat transfer in our public spaces.

Urban Heat Islands (UHIs) are highly populated constructions that acquire and retain heat from the daylight hours long into the night. Significant elevations in temperature are charted across urban zones, with the most notable increases observed in widespread dense, dark, concreted areas such as bitumen roads, airports, and industrial or commercial precincts. Our dependency on air conditioning and refrigeration (and even our own metabolism which produces considerable amounts of heat!) means that humans contribute to this accumulation as well.

In 2009 alone, 374 people perished in one heatwave event across Melbourne’s metropolitan area, a figure greater than Victoria’s average annual road toll. Heatwaves kill more people annually than bushfires, floods and cyclones combined, making them the most dangerous natural disaster in Australia (Gissing and Coates, 2018). With heatwave events forecast to increase in their length, intensity and frequency throughout Australia over the coming decades, if we want to sustain our standard of living, we must take considerable action to adapt our urban environs (Devereux and Caccetta, 2017).

Trees as the first-line approach
In the absence of shade, urban surfaces heat up. This accelerates their deterioration. As pavement temperatures rise, binders break down and the materials begin to harden. When water infiltrates, small cracks lead to big cracks and weakens the layers underneath, creating a defective pavement system with potholes and general deterioration. Not only will shading reduce the UHI effect, but shading the street portion with the most appropriate tree species will extend the life of our roads and reduce costs associated with infrastructure repairs (McPherson and Muchnick, 2005).

To make communities safer and more liveable, the best way to counter-act radiant thermal energy and heat transfer to the UHI is clear: plant more trees.

Planting the right kind of tree in the best location will provide the desired environmental result. When planted in the right context, trees can create large areas of natural shade at maturity, which helps to diminish the effects of the UHI. Further, species selection and strategic placement will determine how much the vegetation cools the urban climate (Doick & Hutchings, 2013) – for example, how composite or small-leafed species maintain lower foliage temperatures when compared to larger-leafed species.

Trees will also limit the intensity of wind and its influence on temperature and erosion. A leafless deciduous tree canopy in winter can reduce local wind speeds by 50-90%. These reduced wind speeds result in lower climate control costs, but in some scenarios these trees will increase cooling expenses during summer by inhibiting the availing cool breezes. Trees and shrubs can also be used to direct or influence wind, providing shelterbelts and by funnelling cool breezes towards buildings (Akbari et al 1992). With appropriate design, planning and construction of new urban spaces, we can achieve great results.

In planning, aiming high is important if we are to succeed. Both Melbourne City Council and the City of Sydney have demonstrated a commitment to increase their tree cover significantly by the mid-2000s. Melbourne has projected an 18% increase by 2040 and Sydney an ambitious target of 50% canopy cover by 2030. This admirable public commitment to tree planning will go a long way to reducing the effects of our UHIs. 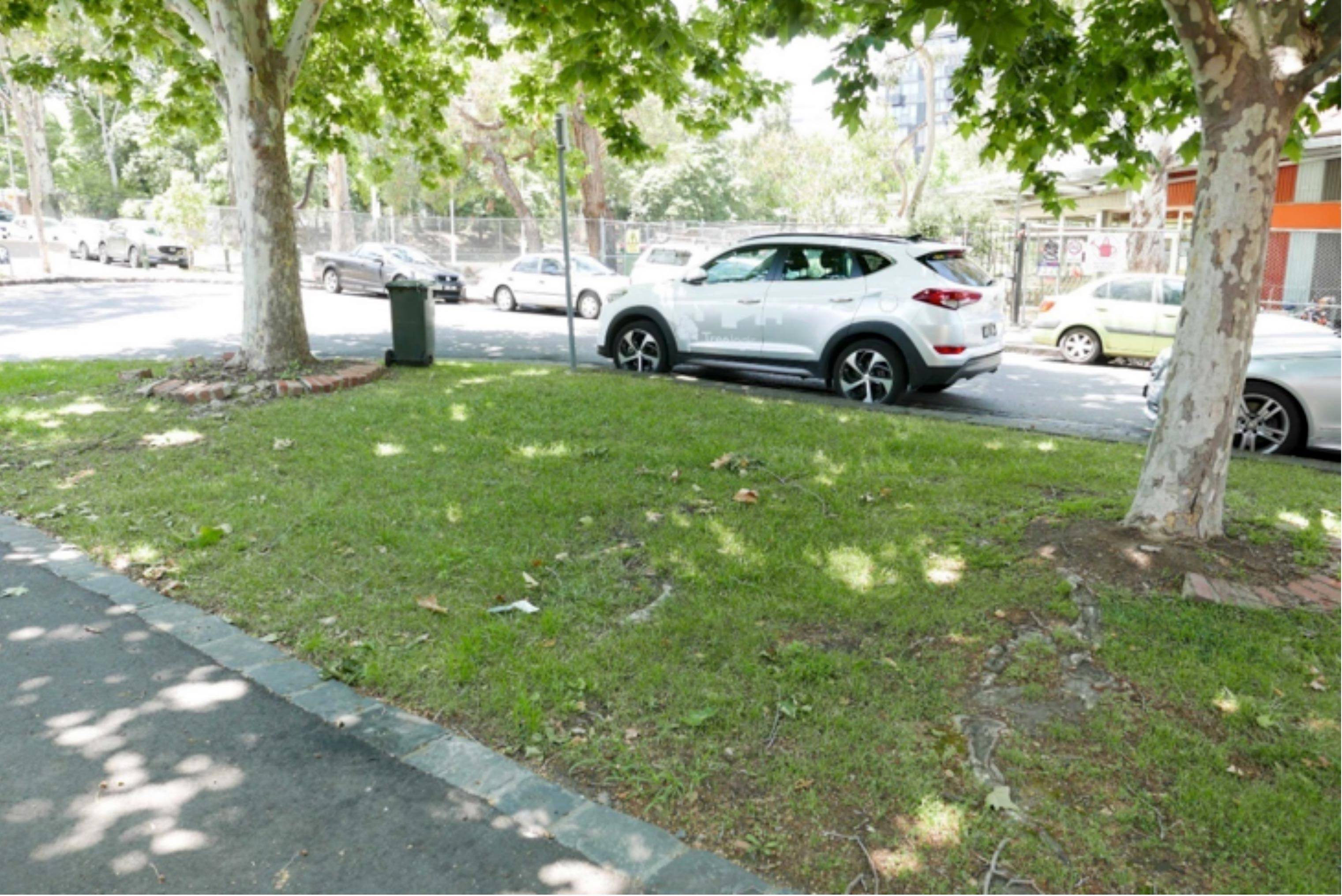 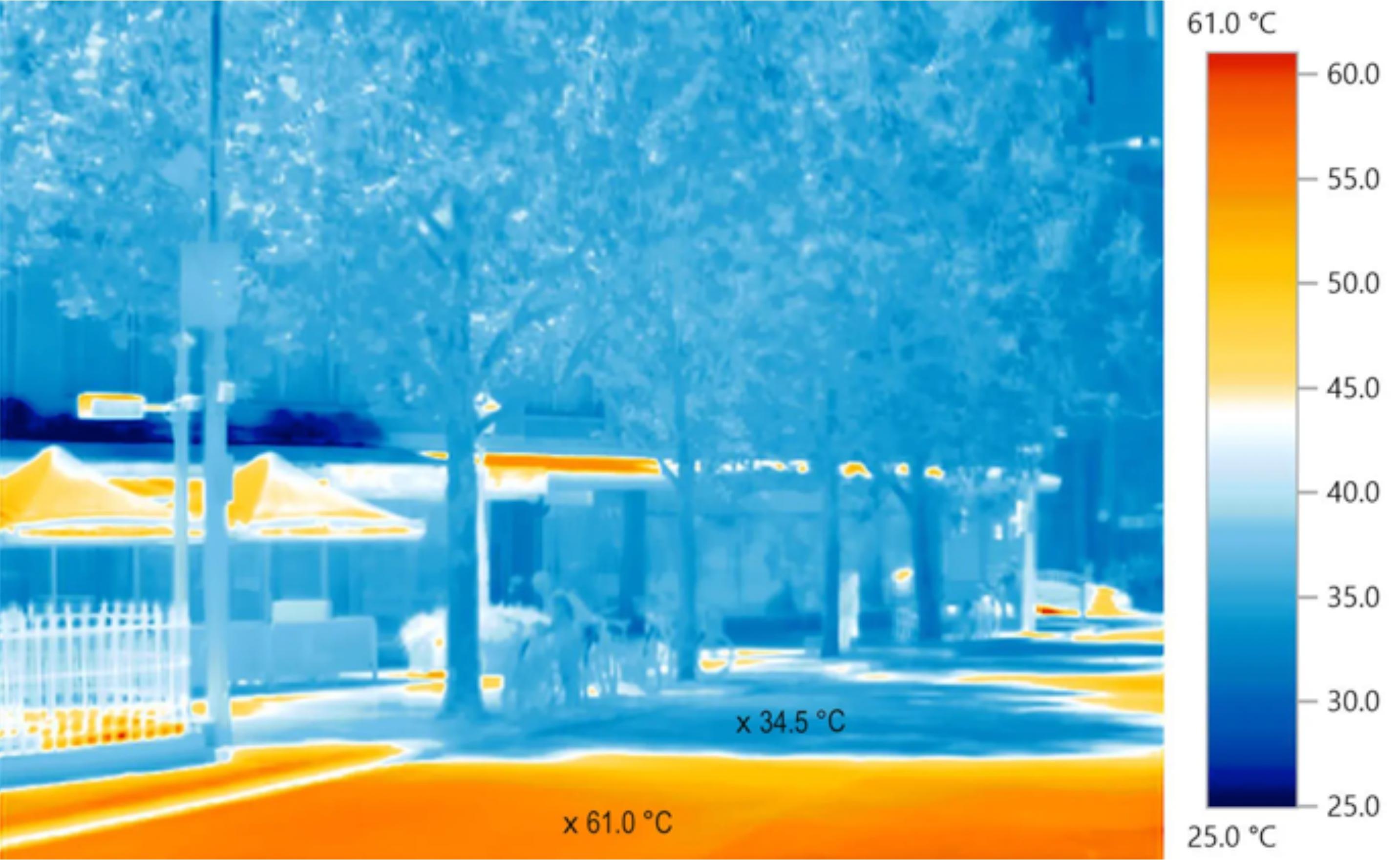 Figure 2: Studies have indicated that shade trees can reduce surface temperature by up to 19°C and inhibit atmospheric temperatures by 5-7°C. This thermal image taken opposite Queen Victoria Market was captured by an Elizabeth Street heat camera in January 2017 during a heatwave. It shows the impact of the urban heat islands in Melbourne’s CBD. Image Source: City of Melbourne.

The limitations of tree planting
There are, however, some limits to such urban planning. Trees can’t be planted in the middle of existing roads. They can’t necessarily be planted on private property, nor do all residents enjoy their presence. There are potential hazards associated with having too many trees, such as security concerns, excessive shading and increased maintenance costs to the consumer. The use of trees and vegetation around buildings can increase fire risks. Householders, especially those in fire prone areas, should seek information on tree selection and placement that minimises those risks. The best laid schemes of humans require positive outcomes to resonate across the population.

Therefore, it is vital that we use the best tree for each location to achieve maximum return – as well consider the pros and cons of other approaches to reducing heat in urban areas.

Using novel surface materials to coat existing roofing, roads and paving has an increased ability to emit absorbed heat, studies indicating that the use of cool roofs and pavements can reduce local temperatures by 2-3°C, as well as lower the running cost of buildings. This approach also carries some risk, with the reflectivity heightening the risks associated with sun glare and driver impairment. Changing the colour of these surfaces can also influence the baseline humidity of an urban setting. The combined effects of humidity and temperature make for uncomfortable living conditions, leading to a variety of serious and potentially lethal conditions. It will take a concerted effort to achieve such ambitious targets, and painted surfaces alone will not be enough.

Incorporating green walls, gardens and other living infrastructure into developments has seen a reduction in net energy costs and improved the water harvesting potential of buildings. In most circumstances, the cardinal direction that a tree faces in relation to a building, the latitude, and the style of pruning can impact shade throughout any season. Shade-effective trees should be established where solar radiation is high, climates are hot, and building energy use is predominantly for cooling (McPherson, 1993). These trees provide the greatest net energy benefit positioned on the west-facing side of a building. A deciduous tree can have equal and opposite influence during colder months too. Choosing the right species for the location or context may seem simple to comprehend, but in practice, poor decisions are still manifesting; decisions we as arborists still encounter daily. Tree selection and placement must be made with extreme prejudice.

Landscaping as a complement to planting is another approach. As water moves from the earth through the plant and up into the atmosphere, it carries residual heat along with it. Encouraging this process by cultivating water availability for plants will see reductions in net ground temperature of the UHI. Designing an interface between urban and natural infrastructure would see tree pits, nature strips and bioswales incorporated into new and existing urban development. This would have the effect of returning bulk stormwater and runoff to the soil, recharging the water table and reducing heat accumulation. 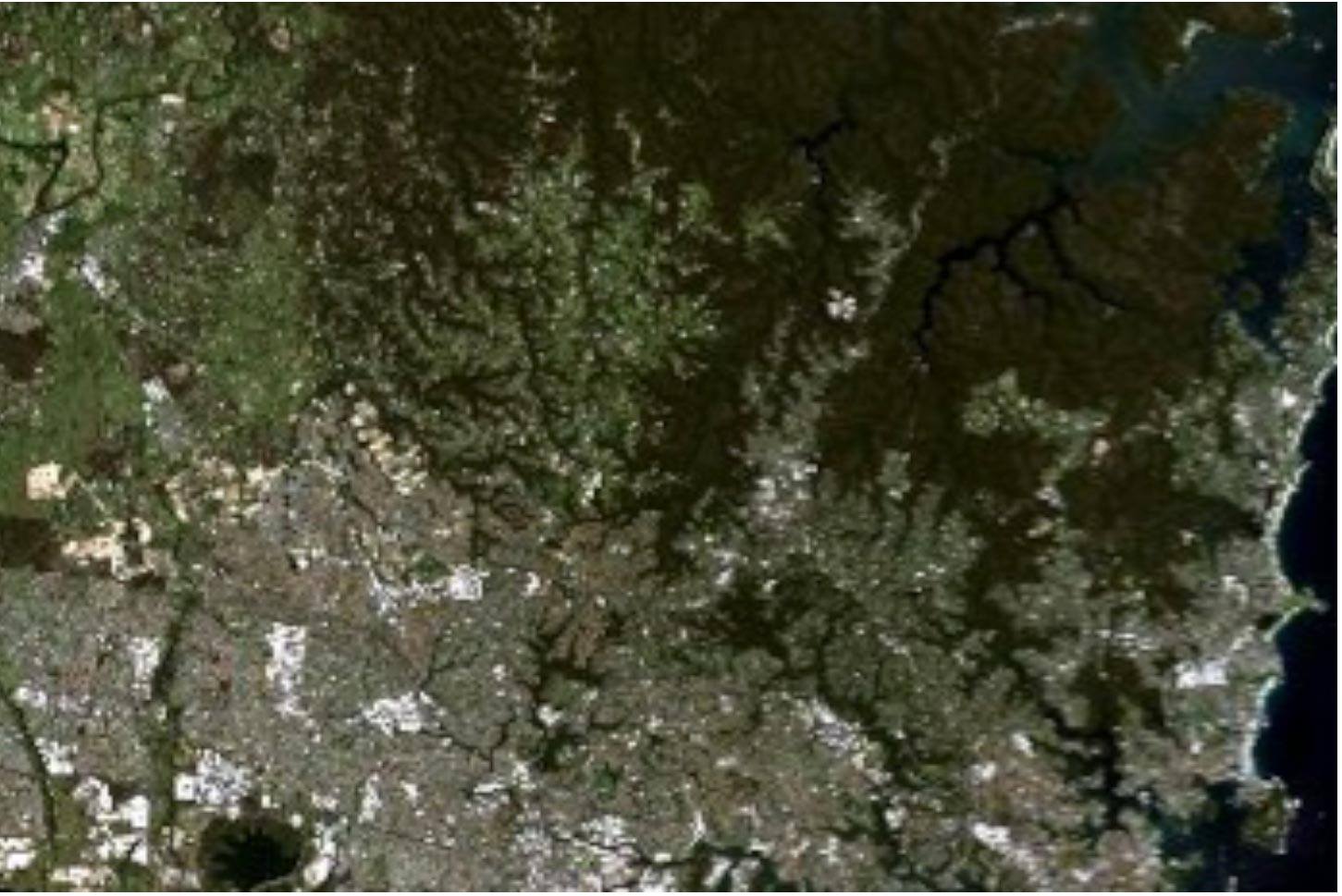 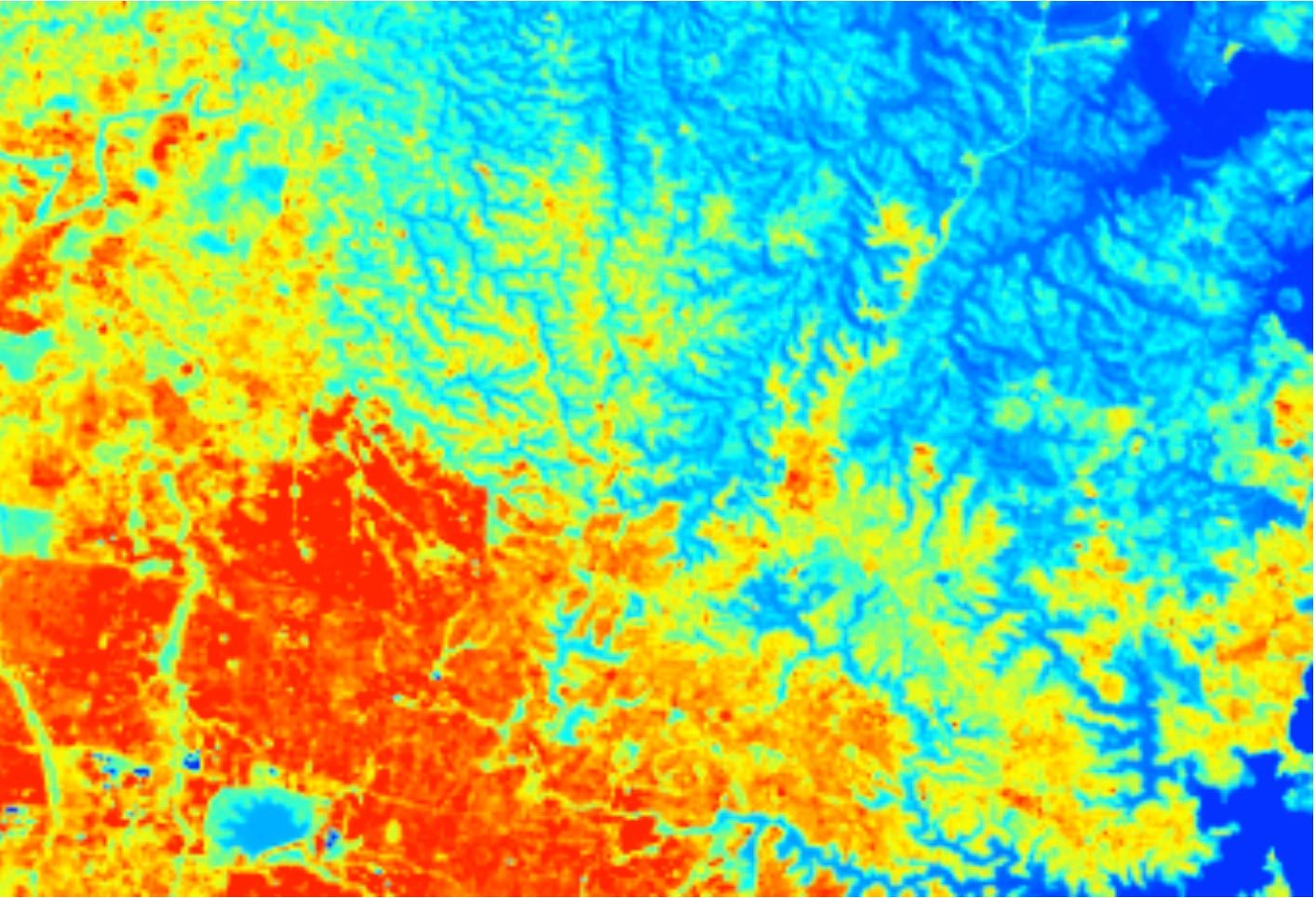 Selecting water-adaptable species
As the Australian continent continues to dry, trees with greater phenotypic plasticity (the ability to adapt to different conditions) to water availability will become highly valued across our streets and parklands.
Exotic species that adapt to variable water availability will cope better during times of limitation, and can modulate their metabolism to suit. Comparatively, native riparian trees with dimorphic root anatomy can access deeper ground water, consuming it at similar rates throughout the year. Although it sounds counter-intuitive, introduced species with novel traits relating to stomatal control and cavitation resistance can be better used in the Australian urban context than their native counterparts (McCarthy and Pataki, 2010). The inherent sustainability of exotic plants will be key when directing the design of irrigated and unirrigated sites. Designers must look to selecting the most appropriate species to suit long-term local environmental parameters.

Even the hardy eucalypt has its pitfalls. Despite their dominance in Australia, large woody eucalypts are considered terrible shade trees in summer, due to leaves that hang vertically to reduce contact with sunlight. This lowers the plant’s exposure to photorespiration, a process where extreme temperature inhibits metabolism by fixing oxygen preferentially in place of carbon dioxide. In the height of summer, the UHI would be receiving extra energy passing through unabated.

To counteract this, increasing the diversity and complexity of tree cover would be a positive way to capture light spill. Selecting appropriate understory species in tandem with broadleaf specimens will capture more light, cast more shade and increase biodiversity within the system.

Creating a unified approach to hotter cities
It is clear that without coordinated efforts between governments, councils, organisations and communities, trees will not be able to carry the UHI burden alone. Smart infrastructure planning, novel building materials and community awareness will be key to achieving such ambitious goals. We need to aim big and be satisfied with accepting less of a return. Increasing liveability within our urban landscapes doesn’t mean a few of us practicing sustainability perfectly: it requires all of us doing it imperfectly.

From an arboricultural perspective, we believe there are a number of steps we can collectively take to coordinate our efforts:

Gissing, A., and Coates, L., (2018) Heatwaves are Australia’s deadliest natural hazard and many of us are unprepared. [Online] Available at: https://www.abc.net.au/news/2018-01-18/heatwaves-australias-deadliest-hazard-why-you-need-plan/9338918. Originally published in The Conversation [Accessed: 11/9/19]